If you need to type a transcript for a recorded talk or event (video or audio), you might find this tool useful.
It's basically a minimal text editor integrated with a media player. Shortcuts are used to control the player while you're typing: pause/unpause (Ctrl-Space) and rewind 5 seconds (Ctrl-R).
That's it ;-) 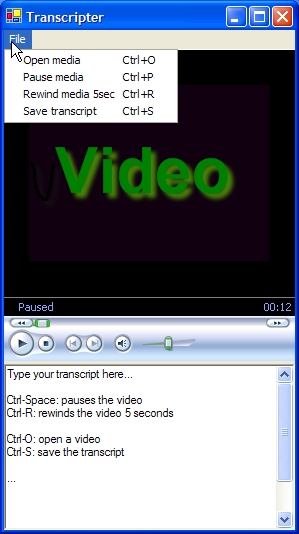 Here's a zip of the source and binaries.
The C# source files come with a VS.net 2003 project and might need that you install the Media Player SDK (I included wmppia.dll, the redistributable PIA for WMP, from the SDK, in the zip too). The binaries were compiled on the .Net framework 1.1.

Of course, transcripting can probably be done with sophisticated speech recognition too, but that would not be a 30 minutes project ;-)
Also, I can easily see how this tool could be extended to allow capturing the timing for the text, for generating subtitle files: you would first segment the text and then just capture time marks when the user presses space.
Another good feature would be spell checking.


Update: A rant about why text rocks.

1. It's written using bloody MS .NET and requires the bloody huge runtime. (For an explanation of why I think Microsoft's dot-net sucks, see my article at http://www.theinquirer.net/?article=16677 , and scroll down to the section "the joy of asp-dot-net".

2. There's a much, much better editor for transcripts (which can be saved as ".srt" subtitles used on Divx / Xvid /Avi movies) that even includes the feature to "time stamp" every transcript line. See it at:
http://catsoft.wz.cz/sp/documents/en/screen_editor.htm
And download it from: http://catsoft.wz.cz/sp/ .
Anyway... nice blog you have!. Kudos from down under.
Fernando Cassia - Buenos Aires, Argentina

Hi Fernando. Thanks for the feedback.
1. The Java runtime download is also around 15MB to download. .Net comes pre-installed on windows XP and further I think, the same way you don't need to download Java if you install some Linux distros.
My guess is that when .Net allocates memory "in advance" that memory is virtually allocated and doesn't actually fill up the physical memory.
.Net executables are usually smaller than native programs. But either way, running a 74k executable is no indication of how much memory it's going to need to run.

2. Thanks a lot for the pointer to the subtitle editor. I'll try it out. But it seems to be more specialized than my little app, in that it seems very centered around the timing.

I really like this program! One small thing to add that would be very useful: a shortcut to resume showing in full screen mode. Right now there is no way to do it. I am using the program to document some long videos taken in full screen (1280x1024) mode using Camtasia screen movie capturing.

One more feature request: a timer to automatically prompt the user every 5 minutes or so (user settable) to remind them to add a comment. Ideally, the video would pause, the time stamp would be added, and the text window would appear in focus.