Hans Rosling on the facts about population 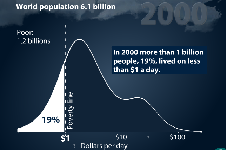 Yet another brilliant presentation by Hans Rosling on facts about population and progress.
Polls show that most people are ignorant about those facts, so watch it.

Population in 1800 was 1 Billion. Current population of 7 Billion would keep growing until 2100 to 11 Billion. Most of this remaining growth is filing the missing adults (as Rosling demonstrates with stack of cubes and points out that Peak Child was reached around 2000), and life extension contributes about 1 Billion.
China, India, Bangladesh, Brazil, etc. now have about 2.5 children per family, compared to 5 about 50 years ago. That's a dramatic change. Almost all surveyed people think it's much higher than actual. But Africa remains behind (still has to go through change Asia did).
Child survival, culture/education and contraception play important roles in birth rate.
Current population distribution is 1B (America) 1B (Europe) 1B (Africa) 4B (Asia). Mid-century is would be 1125, and reach 1145 by end of the century. [But this does not account for people moving.]
Between 1 and 2 Billion in extreme poverty (below $1-$1.5 a day purchasing power). Median of the world is $10. Importance to distinguish between $1 a day to $10 a day, even from our perspective in the group with $100 a day.
Pyramid of needs is food, shoes, bicycle, bike, car.
Example of rural African family with 8 kids saving and investing for roof and now for bicycle. They have to be careful that buyers of crops don't cheat them, and they also negotiate. The bicycle saves time (extra productivity) and allows them to go get some education (literacy).
[I was surprised to see that bicycle had some "luxuries" such as rear view mirror or bell.]
80% of the world is literate (can read and write). But, as with birth statistics, people in developed countries have wrong beliefs about those numbers.

Rosling shows the shift of population across income spectrum in last 100 years. Incredible progress. But extreme poverty remains. It is mostly in their own hands, but some things can help (health, education, infrastructure). [I would add cheaper and well-adapted products, like bicycles, light sources, phones]

At the same time, there is a heavy middle which is still trying to improve to the level of developed countries. This means more appliances and increased energy consumption in the future.
Energy consumption is currently mostly concentrated in the top 2-3 Billion. In most developed countries, it has stabilized and may even shrink. [He mentioned but didn't show carbon emissions though.]
Rosling notes the diminishing returns of energy use. Washing machine is very important, but flying is nice to have.

As usual, he has excellent presentation skills, including clever use of subjective and micro perspectives.
His conclusion, the world is much better than many of us think. There is much progress left to achieve but an unimaginable change has already taken place in last 50 years (most strikingly in Asia).